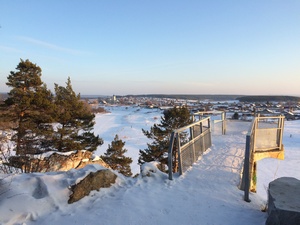 The platform is situated on the top of „Dod Ribs“ cliff. From the platform you will be able to admire a picturesque view of the Chusovaya River andthe St. George Cathedral. Looking down you will get the impression that you are flying over the beautiful place. It is impossible to resist! Many people having visited the viewing platform had a surge of energy and inspiration. The gentle breeze, fresh air and the rustle of forest have an amazing effect.

The Chusovaya is a legendary river. And this is not by chance. The Urals without the Chusovaya is like a sail without a mast, like horses without harness. These are not the beautiful river banks that matter, but the fact that it was the river which led Russian people to Siberia and later let the territory develop its own unique Ural “metallurgical civilization”

“Dog Ribs” cliff is a small low limestone rock which consists of slanting slabs. It reminded people of dog’s ribs that is why it was called that way.

St. George Cathedral is the main landmark of the village Sloboda. Built in 1806 it has never been closed or violated so it is considered to be “prayed-in”.

The ancient village Sloboda, situated between the Chusovaya and the Utka rivers, was founded in 1651. Initially, the interfluve area was called Utka Sloboda. Here the river makes one of its most breath-taking twists. Interestingly, Ekaterinburg city could have been founded here, as Vasiliy Tatischev considered the area to build the mining and metallurgical capital of the Urals. However, as we all know, another place on the Iset River was chosen as a result.