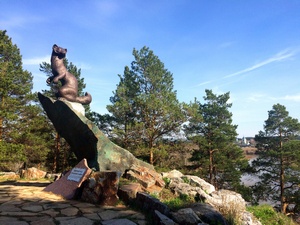 Sable is a clever and strong little animal which brings luck and protects the tourists in the forest and afloat. It is believed that if tourists and guests of the activity center rub sable’s left paw their holidays, rafting or hiking trips will be successful.

The sculpture of a sable was fixed up in 2014 in honor of the 80th anniversary of “Chusovaya” holiday center because sable is traditionally considered to be the patron of the Urals mountains.

Sables inhabit conifer forests from the North Cisurals to the Pacific ocean. It is a small carnivorous animal. Interestingly, it mainly feeds on cedar nuts. The images of sables can be found on the coats of arms of Sverdlovks and Tumen regions, and such cities and towns as Ekaterinburg, Pervouralsk, Jakutsk, Novosibirst, Verhoturie, Lesosibirsk …

Sable fur was very precious and for a long time it was used as money equivalent. The price of an iron pot was equivalent to the number of sable skins which could be placed into it.

Some historians compared the quality of the Ural iron with sable fur. The Ural iron is made of high-mountain ore which partakes of copper. As a result the iron is “soft” and has good forge quality. The sable is also highly-prized for its soft fur.

Sable is also a brand. The hallmark with the image of the precious little animal was put on the widely-known metal goods made in the Urals. For example there was a well-known metal under the trade mark “White Sable”, also there was the Demodovs brand, Old Sable, which was put on the iron goods produced in Russia in the XVIII-XIX centuries.