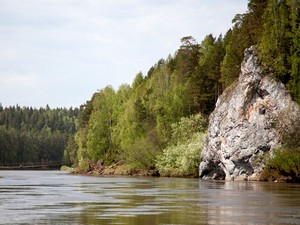 The Guard cliff is actually a part of the St.George rocks. However unlike the rocks it plunges into the river. It was difficult for the boats to sail round the cliff and it was called “the Cliff behind the chapel”, later “Guard rock” and now it is known as Guard cliff.

The other name of the stone is Gulay-stone. (Gulay – get free)The name was given by the raftsmen. It was the first crash rock in the Chusovaya after the Utka state-owned quay. It was widely believed that after the rock you could relax for some time.

The Guard cliff looks like a pyramid. It consists of slanted layers of limestone. This beautiful rock is about 25 meters high.

In 1968 the Jaropolk Lapshin, a famous director of Sverdlovsk film studio, shot here the first historical multi-part film in the kinematographic history of the USSR. It was called “Gloom river”. The St.George rocks and Guard Cliff are easily recognizable in the film. This is the place from which the main hero of the film falls into the river at the end of the film.

The gliff has got a small grotto called  Vogul temple.