Pagan gods of the early Slavs 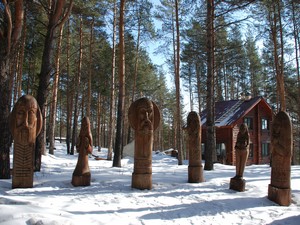 The wooden idols of pagan gods were made for the shooting of a feature film “Varvara” (https://www.youtube.com/watch?v=N2uTexuCr34), which was shot at the Chusovaya River near the tourist center. After the end of shooting in 2010, the idols were fixed up in a pagan early Slavs temple, the place of Gods power and of our ancestors wisdom. This is considered to be a place of spiritual  growth, here the Gods look closely at men and men look at the Gods!

The first idol on the left is Belbog (White God), he is a kind image of the Supreme Slavs God Rod, the incarnation of light. He is the God of luck and happiness, who gives the universe powers of preservation and creation. He is the god of a sunny spring day, the God of happy life. Our Slavic ancestors never started any serious business without praying Belobog.

The wooden idol with a sword and a shield is Jarovit , the host of heaven, the God of spring thunderstorms, clouds and winds . He is a warlike god too. His name means “Jaro” – “furious”, “vit” – “wind”, a furious spirit of warrier. On behalf of Jarovit the priest pronounces the following words: “I am your god, I am the one who gives the grass to the fields and the leaves to the trees; I have power over all the crops of fields and all the fruits of trees,  of all the crops of flocks and of everything serving to the men. I give everything to those who worship and take everything from those who deny me”.

The idol of an old man with folded hands is the God Rod, the earliest supreme Slavs God, the God praised by all the people. Rod was the god of the sky, the thunder, soil fertility. People said that he flew on a cloud, sent rains to the earth thereon the children were born. He was the master of all the earth, of all the living creatures, he was the pagan God of creation. In Slavic languages “rod” means family ties, birth, water (spring), yield. Such words as “narod” (people) and “rodina” (Motherland) also come from the same root. It also symbolizes red colour and a fireball (which was called “rodia”). The diversity of the stem words prove that the god was highly respected.

The idol of an old woman is the great Goddess Makosh. The name Makosh comes from the word combination “ma” for “mother” and “kosh” for “destiny”. Thus is can be translated as The Mother of Destiny. She knows the secret of Destiny of all people. All the people and Gods obey her! She gives protection to women in their household chores. Makosh spins the thread of destiny and depending on our actions; she spins good and bad actions and acts into it. Makosh is also the patroness of marriage and domestic harmony.

The idol of a woman with folded arms is the Goddess Lada, female incarnation of the God Rod. She is the goddess of love, beauty, marriage and plenty. The early Slavs called Lada not only the goddess of love, but also the way of life (Lad), where everything must be harmonious and graceful. Women called their beloved Lado, men called women Ladushka. The tradition to give women flowers comes from the offerings to the Goddess Lada who was given chaplets and bunches of flowers. Lada is favorable to all the aspirations of people and even if they hate her she loves them in return. All the hereditary property and precious processions of the family were given under the protection of Lada. She blesses people, brings harmony to their houses and is described as beautiful and graceful. Slavs worshiped their Goddess of light to get everything right and to have family happiness.