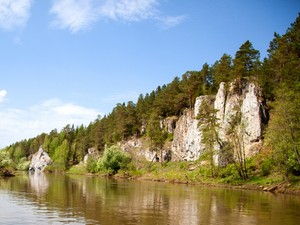 St.George rocks form cliffy banks of the Chusovaya river and consist of carboniferous calcareous and Devonian sediments. From 1651 there was St.George chapel on the top of the rocks so they were named after the chapel. Before the convoys set out for their dangerous journey, all its participants took part in a religious procession and a church service. Also a traditional annual procession from Utkinskaya Sloboda village took place here on the 23rd April/6th May. However in the soviet period the chapel was destroyed.

The chapel also gave the name to the church in the West part of the village Sloboda on the right rocky bank of the Chusivaya. This is the only religious building which preserved not only its architecture  but its purpose as it has never been closed or violated.

In the rocks there are several small grottos 4-6 meters long. There is also an “energy” cave where there is enough place for 20 people. The St. George rock is a geomorphic and natural wonder. The square of its area is about 50 hectars.