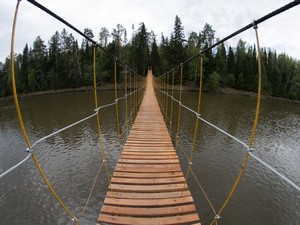 The 100 meter long hanging bridge connects the banks of the Chusovaya River. The bridge was constructed in honor of the 80th anniversary of the Park-Hotel Chusovaya in 2013 as a part of walking route “Chusovaya circumnavigation” and was funded by a local philanthropist Anna Manekina.

In 2016 Ann’s bridge was destroyed by the flood. However it was rebuilt in the same year.